This guide shows you the best places to buy men's clothing and menswear in Kelowna, BC.

Wearing the right clothes makes a big difference, especially if you need to look good for a wedding, business interview, or a hot date.

Here are 8 places to buy men's clothing in Kelowna, BC. 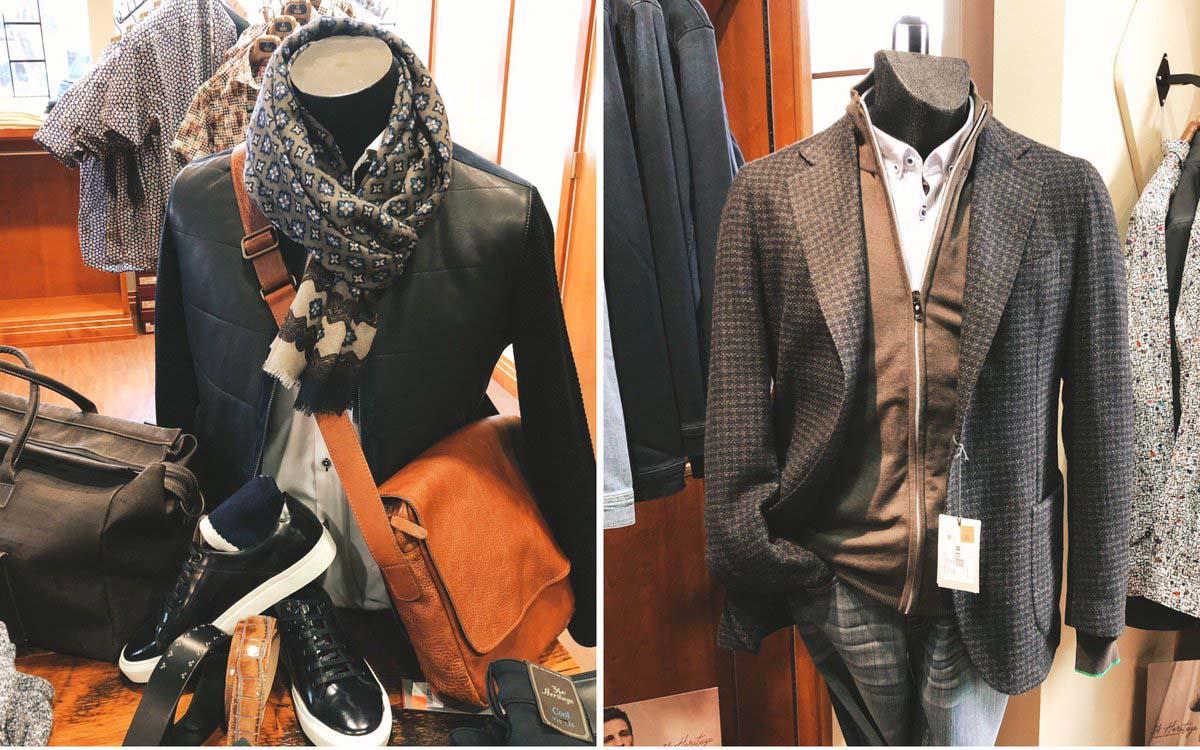 Landmark Clothiers has two stores in Kelowna - one in the Delta Grand Hotel and a second location in its namesake Landmark Centre.

Dale, the manager at Landmark Clothiers, has been in the fashion industry since the 1990’s and carries a finely-curated selection of American, Canadian, and European men’s fashion brands like Jack Victor, Sunwill, Baldessari, Baumler, Digel, and Eterna.

If you ask around town, the first place most people will send you for upscale men’s clothing in Kelowna is MacDermott’s on Bernard Ave. A longstanding Kelowna institution, McDermotts has been suiting the Okanagan since 1994. Inside you’ll find shirts, shoes, and accessories by brands like Hugo Boss, Coppley, Tommy Bahama, and Jon Varvatos in Kelowna  - and a vast selection of fun socks to complete your look. Torino Clothing offers men’s formal and casual wear from their well-stocked location in the Pandosy Village. Torino Clothing carries the Samuelsohn brand, which is widely regarded as the best made-in-Canada suit brand.

When it comes to fully-lined worsted wool suits (and you should not settle for less), "Sammys" is one of the best value in Canada, and probably the highest quality anywhere in Kelowna. You’ll also find mens clothing brands like Mac, Bugatti, and Empire at Torino Ritz.

If you're looking for high-end menswear, you must check out Torino Ritz for quality garments and awesome service.

For suits and formalwear in the mid-range, Moore's for Men is a tried and true menswear option in Kelowna. For around $600, Moore’s can make you a custom-tailored Joseph Abboud suit in a pattern of your choice, complete with your own personalized monograms. Located downtown on Bernard Avenue, Bia Boro is perhaps the best clothing store in Kelowna for both women and men. Bia Boro’s mens clothing line embraces modern designs, sustainable bamboo textiles, and intricate patterns. If you’re looking for a unique look to separate you from the flock, get yourself over to Bia Boro the next time you’re shopping in Kelowna.

The Orchard Park Mall has never been a haven for men’s clothing, but there are now a couple of Kelowna men’s clothing stores that are well worth a visit. Man + Woman is a well curated store filled with men's clothing, shoes, accessories, and housewares. With modern, minimalist designs, this is a fantastic option for mens casualwear, and our top pick for menswear in Orchard Park Mall. If off-the-rack sizing works for you, you can buy sports coats, dress shirts, accessories, and men’s casual clothing at Kelowna’s RW & Co. store in Orchard Park Mall. Due to RW&Co's ubiquitousness, there’s a very good chance you’ll see somebody else in town wearing the same men's shirt.

If you didn't get what you're looking for in the stores featured here, check out our Kelowna vintage clothing guide, or for women - our new clothing stores guide.

Or just give up shopping and grab a pint or hit the beach.

Find Your New Home in Kelowna, BC

Looking to buy or sell real estate in Kelowna, BC, Canada? Contact Vantage West Realty, your Kelowna real estate professionals with 20+ years of experience in the Okanagan Valley.