Lakeview Heights is one of the most popular neighborhoods to buy a home in West Kelowna, British Columbia. With stunning lake and mountain views, quiet streets, and larger than average properties, Lakeview Heights offers a rural lifestyle with the convenience of being a short drive from both West Kelowna and the Okanagan Lake bridge.

Most houses in Lakeview Heights were built through the 1950’s to 1970’s in the American contemporary style, featuring multi-levels, front and back yards, driveways, and 2-car garages. While Lakeview Heights is considered a suburb, its orchards, wineries, and untouched parks make Lakeview Heights feel more like the countryside.

Home prices in Lakeview Heights start around $700k and range up to the multi millions. 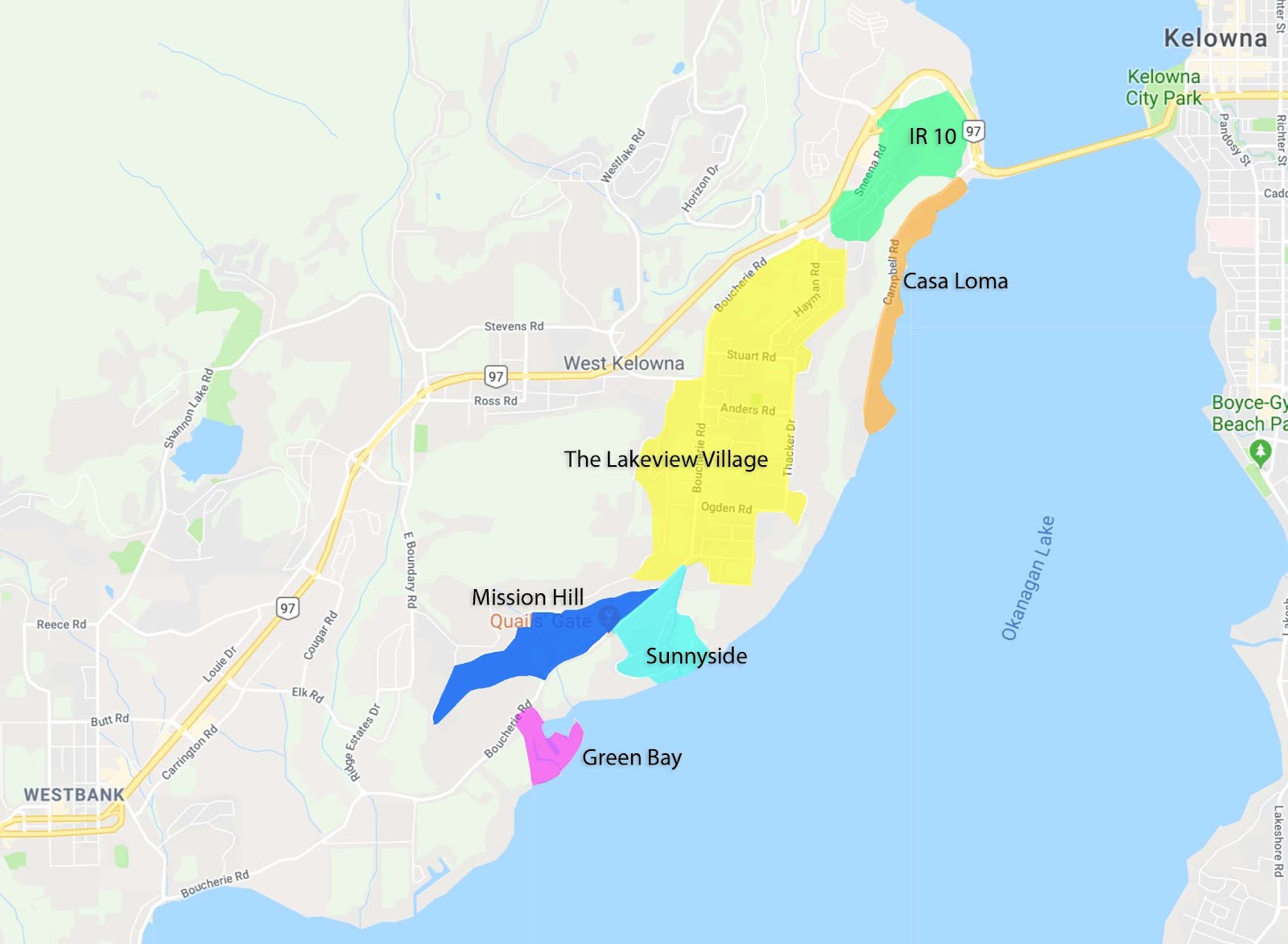 Known for its world-famous winery and restaurant, Mission Hill offers the highest elevation in Lakeview Heights with panoramic views extending over the lake, mountains, and vineyards of West Kelowna.

Nearby recreation options for Mission Hill residents include riding bikes on Mount Boucherie, hiking through Kalamoir Park, and swimming at the nearby beaches and ferry docks.

15 mins to cross the bridge

The hillside community of Sunnyside & Green Bay stretches from Boucherie Road down to the pebbled shores of Okanagan Lake.

Sunnyside is well known for two things: award-winning wineries, and the most iconic view in the Okanagan Valley. The vineyards of Quail’s Gate and The Hatch wineries roll towards Okanagan lake with mountains stretching as far as the eye can see to the southwest. Sunnyside even has its own public beach at the end of Sunnybrae Drive, and hike-in access to Kalamoir Park.

Further down Boucherie Road is the small, lakeside community of Green Bay. While it was once a very modest neighborhood, Green Bay now has some of the largest and most valuable homes anywhere in Lakeview.

15 mins to cross the bridge

The secluded waterfront community of Casa Loma starts at the west end of the Okanagan Lake bridge and ends on Campbell Road. Casa Loma is completely surrounded by nature - you have the Okanagan Lake to the south, Kalamoir Park to the west, and the cliffs of Lakeview Heights to the north.

With its own local beaches, the Casa Loma Resort, and Kalamoir Park at your doorstep, Casa Loma gives you that summer cottage feeling all year round. Casa Loma also has the best bridge access of any neighborhood in West Kelowna.

The neighborhood is in good hands as Casa Loma’s well-established Community Association solicits input from residents on safety, taxation, and development proposals.

5 mins to cross the bridge

Ranging from Ogden Drive to the north end of Thacker Drive, the Lakeview Village offers a wide variety of home styles and some of the largest lot sizes in all of Lakeview. Lakeview is home to the Westside Wine Trail with Grizzly, Little Straw, Boucherie, Beaumont, and Volcanic Hills wineries. Many of Lakeview's wineries now offer sit down dining. There's a Domino's Pizza, grocery store, and a local microbrewery called Lakesider Brewing at the Lakeview Market on Anders Rd.

Wherever you are in Lakeview Village, you’re within walking distance of the gorgeous Kalamoir Park with walking, cycling, and horseback riding trails and a ton of beach space.

10 mins to cross the bridge

Lakeridge Park encompasses the properties between Sneena Road and the north end of Thacker Drive. Homes in this area are sold on leased land from the Westbank First Nations band, which means you won’t actually own title to the land, but will rent it for a long stretch of time - sometimes up to 99 years. This makes property values somewhat lower in this microneighborhood than the rest of Lakeview.

Lakeridge residents also pay lower property taxes than the rest of Lakeview Heights since municipal services there are provided through Westbank First Nations.

Lakeridge Park - ‘Tsinstikeptum’ as it’s known in the local tongue - is just above Kalamoir Park with great hiking trails and untouched nature.

10 mins to cross the bridge

Thinking about buying in West Kelowna?