The Most Walkable Neighborhoods in Kelowna, BC

Kelowna is one of the Okanagan’s fastest growing cities, but not every neighborhood is considered a walkable area.

The City of Kelowna, British Columbia gets an overall “walk score” of 42/100, a rather low score compared to the most walkable cities in Canada like Vancouver or Montréal. Walk score is based on walkability factors like block size, density, and the average distances to basic amenities.

This guide combines walk score metrics and our expert local perspective to show you the most walkable neighbourhoods and walkable communities in Kelowna, BC, Canada.

A note to cyclists: each of the Kelowna neighborhoods featured in this guide have bicycle lanes, and should also be considered good areas for getting around on e-scooter riders.

From the North End, you’re a 5 to 10 minute walk from great coffee shops, restaurants,  microbreweries, tasting rooms, and art galleries along both Ellis and Richter Street.

Kelowna’s Pandosy Village is a neighborhood with a character of its own that feels like a beachside town next to Okanagan Lake.

The South Pandosy Kelowna neighbourhood is somewhat upscale with a variety of housing options from apartment and condo towers to enourmous waterfront homes.

Wherever you are in Pandosy Village, you’re a short walk to pubs, restaurants, art galleries, fashion boutiques, and Gyro Beach - making this one of the best areas to stay in Kelowna on holiday or a business trip.

You can get your grocery shopping done at the IGA or Lakeview Market, one of Kelowna’s only independent grocery stores. And it’s one of the only Kelowna neighbourhoods within walking distance of an official BC Liquor Store.

The historic, tree-lined Abbott street is perhaps the most walkable, bikeable, and skateboard-able street in all of Kelowna. A separate walking and cycling path runs from Kelowna’s City Park all the way to Kelowna General Hospital.

Dozens of public access beaches are speckled along the shoreline, which means sunsets at the beach can part of your daily routine.

Walk downtown for coffee at the Bean Scene, grab a bite at Earl’s on Top’s famous patio, or dance the night away at Sapphire Nightclub. 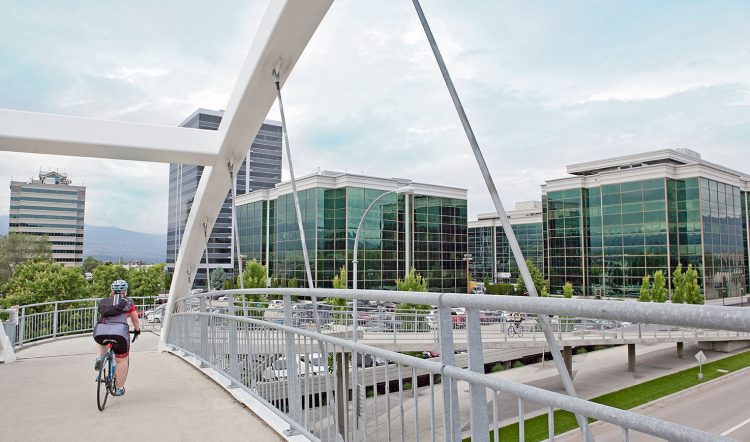 The Capri Landmark area is the most centrally located neighborhood in Kelowna City centre and the epicenter of Kelowna’s growing Tech hub.

Walk to work at the Landmark buildings, get coffee at the Bean Scene, grab a bite at the new District Market restaurants, then take a walk or ride a bike through the lush green parks surrounding Mill Creek.

You’re close to all of the amenities in the Capri Landmark area – grocers, banks, pharmacies, cold beer & wine, and a drop-in medical clinic at Capri Centre Mall.

The Capri Landmark neighborhood is the site for one of Kelowna’s most ambitious redevelopment proposals which was just approved in spring 2019: brand new residential and commercial towers, more green spaces, bicycle paths, and new roads will be developed beginning in 2020.

Located at the far east end of the city, Rutland is one of Kelowna’s most walkable neighborhoods, and offers some of the most affordable housing and anywhere in town.

Rutland is home to a variety of green spaces: Ben Lee Park has the biggest and best outdoor skateboard park in town; Chichester Marsh is one of the Okanagan’s most biodiverse parks; and the Mission Creek Greenway is easily accessed via Hollywood Road.

Rutland is also home to it’s own sports field, arena, and recreation centre, which means you might not have to drive to after school or work activities. Ample bus routes connect Rutland to Downtown and the rest of Kelowna via Highway 33.

Local’s Tip: while high in walkability, some of Rutland's streets are considered less safe at night than the other neighborhoods in this guide.

Check out our Guide to the Safest Neighborhoods in Kelowna.

Thinking about buying in Kelowna?

We'd love to help you find your dream home.